A Daisy Pool Blanket provides a physical barrier to evaporation.

This Fact Sheet explains all that.

PLEASE NOTE: All figures quoted refer to typical UNHEATED pools. If your pool is heated, and depending when and to what temperature, the evaporation rates could well be significantly higher.

How much water does your pool hold?

Most people are surprised by what seem like enormous quantities of water that an average pool can lose through evaporation. The main reason they are so surprised - and sometimes question the quantity evaporating - is that they don’t usually have much idea how much water their pool holds in the first place. To put things into perspective, here are some of the sizes and capacities of pools that you would typically find in backyards right across Australia.

Perhaps measure your own pool roughly and do the sum.
According to the Swimming Pool and Spa Association NSW, Australian domestic swimming pools generally hold between 22,000 and 60,000 litres of water, with the average being between 40,000 and 50,000 litres.

How much are you really topping up your pool?

Here’s some more information that might also come as a surprise. Do you know how much water flows from your backyard hose per minute?
Of course it will vary with local water pressure, but according to the NSW Government ‘Water for Life Plan’, it can be around 17 litres a minute.
So, how often do you top up your pool in summer?

As an example, 10 minutes a day, every second day would use:

This is a very conservative estimate. In the middle of summer it is quite common that it would be more like:

Makes you think, doesn’t it.

As we know from boiling water and seeing it turn into steam, a simple definition of evaporation is: the process whereby liquid water becomes a gas and dissipates as the water temperature is increased. Eventually, a saucepan of water will ‘boil dry’ as all the liquid becomes a gas and disappears into the atmosphere.
Calculating evaporation rates is a very complicated process, with many variables such as water surface area, water temperature, air temperature, air pressure, air density, wind speed, and humidity - among others - all affecting evaporation.

The main factors that affect evaporation rates from domestic outdoor pools are:

The figures above are DAILY rates.

So in Sydney for example, for every square metre of pool area - an average of 6.4mm of water is lost to evaporation.
That’s 6.4 litres of water - per square metre - per day!
The following table shows the average DAILY evaporation in litres for the same three pool sizes we used at the beginning of this Fact Sheet across the five capital cities.

If you’re in Perth, and have a 9.2m x 4.5m pool, you’re losing an average 344 litres each and every day for the six month swimming season.
The approximate total water lost is a staggering 182 days x 344 litres = 62,608 litres or 10,435 litres a month.
To use our earlier ‘topping up’ hose flow rate of 17 litres a minute, to replace that water you’d need to run your hose for 20 minutes every single day for six months.
Here are accurate figures for the same size pool in all cities:

Although evaporation rates are lower during the cooler six months of the year, it never stops.
For Perth, the average 12 month evaporation volume totals 86,054 litres - 7,171 litres a month. The pool only holds 53,280 litres, so it’s losing more than 1.5 times its total capacity each year. In the two lowest evaporation months, June and July, it’s still losing 2,970 litres in each of those months.
For the same pool in Sydney, the 12 month total evaporation loss is 81,189 litres - 6,766 litres a month.

A Daisy pool blanket will almost completely stop evaporation - yet, when it does rain, all the water that does fall can still go into the pool, effectively ‘topping it up’.
In an uncovered pool, some water lost to evaporation will also be replaced by rainfall. However, rain is likely to have only a small effect on the total evaporation water loss - for several significant reasons.
Firstly, in the hottest summer months when evaporation is the highest, rainfall is highly unreliable, and generally at the year’s lowest levels.
Secondly, you can’t turn the rain on and off like a tap.
Your pool may well be full when summer rain does fall, so the water will simply run off as overflow.
Some summer rain will certainly help top up an uncovered pool, however, it is almost impossible to predict how much the effect of this would be.
Even if we adopt a quite unrealistic approach of assuming all the rain that falls refills your pool - and none overflows - the net evaporation losses are still quite alarming. 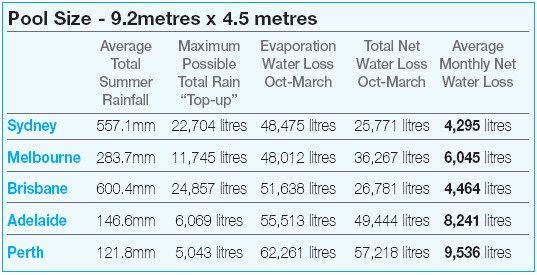 This is a highly unrealistic scenario. If rain was to fall evenly across this six month period, the maximum amounts by which rain could compensate for evaporation loss are: Perth, 10% - Adelaide, 11% - Melbourne, 24% - Sydney, 47% - Brisbane, 48%.
However, the two highest summer rainfall cities, Brisbane and Sydney, each average only 11 rain days per month October to March. So, all their rain falls on just 66 days out of 182. Therefore, although it is impossible to calculate exactly how much - a very significant proportion of the rain that does fall into swimming pools will overflow and run off.